Masters of Ceremonies and Event Hosts

Karli is a proud Interlaker and cow tipper. Raised on a cattle farm, Karli has a passion for all things livestock.

Her background in agriculture and farm journalism and her role in communications at DUC give her a unique approach in sharing the story about conservation and rural sustainability in Canada.

Karli is an avid baseball player and even got married on a ball diamond. When she’s not cheering for the Toronto Blue Jays, Karli likes to travel and spend time with her husband and daughter on their acreage in the south Interlake. 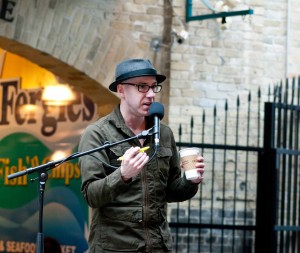 Ace Burpee is the Program Director for Virgin Radio and host of the Ace Burpee Show.

Ace was raised in Cooks Creek, Manitoba but now calls Winnipeg home. In his spare time, he enjoys fishing, skateboarding and playing hockey, soccer and basketball. Ace is a HUGE hockey fan and is thrilled that the Jets are back in Winnipeg, where they belong.

Ace is not only a radio personality but a writer, humanitarian, community advocate, and active social media user –  he can Tweet in his sleep and he has over 20,000 followers. On top of that,  he can drive a combine, a balewagon and is very good with a rototiller.

Getty Stewart is a Professional Home Economist, author and speaker with a passion for growing, harvesting, sharing and enjoying prairie fruits and veggies. She is the founder of Fruit Share, author of Manitoba’s Best-selling Prairie Fruit Cookbook, and blogger behind www.veggiedelight.ca, a Manitoba vegetable gardening blog. Getty’s work in promoting local food systems earned her a Golden Carrot Award and the distinction of being one of Oxfam Canada’s Female Food Heroes in 2012.

Discover the large variety of prairie fruit growing in backyards throughout the province. From apples to apricots, you’ll be pleasantly surprised to discover the bounty around us and how you can join in the harvest with Fruit Share – a volunteer organization that picks unwanted fruit and shares it between homeowners, volunteers and community organizations. A fun game of Prairie Fruit Jeopardy will help identify and explore our prairie fruit while tasty recipes and preserving ideas from the Prairie Fruit Cookbook will have your mouth water.

Chef Mary-Jane received the notable award of Chef of the Year from the CCFCC Winnipeg Branch in 2011, being the first female to receive this award. She attended the 23rd World Culinary Olympics in Erfurt, Germany this past fall, representing Team Manitoba. They did Manitoba proud and brought home a silver medal.

Adriana is Executive Coordinator of the Farm to School Manitoba Healthy Choice Fundraiser where current priorities include promotion of the program to schools and daycares across Manitoba with goals of distributing as many pounds of Manitoba vegetables to communities across the province as possible.

On Sunday of this year’s Ag in the City, Adriana will be running a Veg-athlon which features three engaging activities including: a panel of judges for Best Mr. Cabbage Head; a race to the finish line with an onion on a soup spoon; and a demonstration of a Made-in-Manitoba veggie soup. Join in on the action!